Taking a bird’s-eye view: the 4th meeting of national networks of GEN Europe 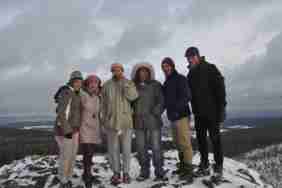 (18 January 2017) – After Torri Superiore (Italy), Los Portales (Spain), Park Istra (Slovenia) the fourth venue for the GEN national network meeting was Lebensbogen (Germany). 21 representatives from 12 countries gathered on 13-15 January to review and celebrate activities in 2016, and to develop plans for 2017.

Many countries reported about increasing collaboration with familiar networks, particularly with Permaculture and Transition Town networks, as well as with other organisations, such as Facilitators Associations, universities and municipalities. There are signs that it would be plausible to build alliances on national level, resembling the European coalition embodied in ECOLISE.

Now common themes in ecovillages are not only (self-)sustainability, agriculture, permaculture, green technology, ecology and education, but also youth work, reviving traditions, scientific research, influencing policy, social change etc. Some national networks are very successful in connecting with administration and policy-makers, while others are facing problems in that field.

In the last years new models of ecovillages have emerged. In the past, living in an ecovillage meant moving far away from the city, living off the land, being self-sufficient. Now it might be creating a business in the countryside with other people, managing AirBnB or a retreat centre, starting an agricultural cooperative, starting an eco-community or co-housing near or in the city.

Ecovillages are getting more organised, they have legal structures, they are connecting with other ecovillages, creating businesses. The image of ecovillages is also improving, visitors are impressed with the facilities (rooms, halls, surroundings etc.) and how well connected ecovillagers are with the world.