Social Solidarity Economy and the Commons conference hopeful yet critical 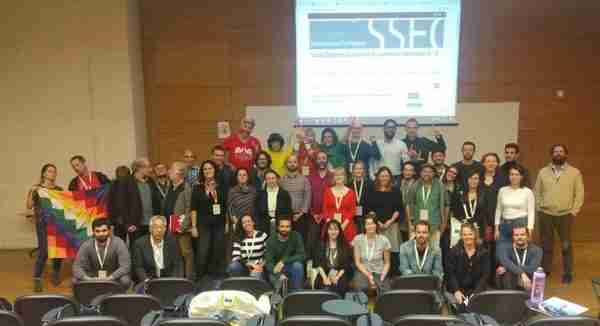 A hopeful yet notably system-critical atmosphere similar to that of Degrowth movement gatherings was tangible at the second international conference ‘Social Solidarity Economy and the Commons’, held 6th to 8th of November 2019 at the Instituto Universitário de Lisboa in Lisbon, Portugal.

Donatella della Porta of Scuola Normale Superiore, Italy, started off the conference with an overview of historic processes and the current state of the volatile world of politics and protests. Boris Marañón Pimentel, Universidad Nacional Autónoma de México, captured the audience with his extreme clarity on the economic and power-related processes we are currently witnessing.

This event gathered researchers, activists, public officials and social entrepreneurs involved in social and solidarity economy, governance of the commons and new social movements in different parts of the world in particular Europe and Brazil.

The conference successfully generated an open, interdisciplinary and transdisciplinary space for exchange of knowledge and socio-political experiences on new approaches to economic organisation and governance. Besides the standard feature of academic paper presentations in panels, the gathering held three lighter research derbies where participants co-created innovative thinking around given topics proposed by participants. One of these derbies, in which ECOLISE research coordinator Tom Henfrey was active, collaborated around the role of translocality in societal transformation processes.

The conference was organized by the Centre for International Studies (CEI-IUL) with the support of ECOLISE and six other academic institutions. Crucial roles both behind and on the scenes were played by Ana Margarida Esteves of CEI-IUL and Gil Pessanha Penha-Lopes of Universidade de Lisboa.