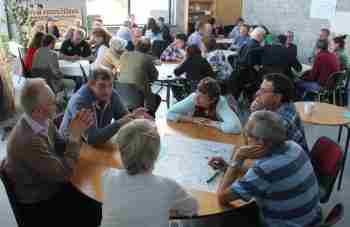 (10 April 2018) – Talanoa, a traditional process of inclusive, participatory and transparent dialogue from the Pacific islands, comes to Brussels next week in the form of an event organised by the European Economic and Social Committee, the European Dialogue on Non-State Climate Action.
The event recognises that the shift towards a low-carbon and climate-resilient economy has been driven largely by bottom-up initiatives led by citizens, innovative businesses and various civil society stakeholders, as well as by local and regional authorities, collectively referred to as non-state and sub-national actors.
By sharing ideas, skills and experience through storytelling Talanoa fosters stability and inclusiveness for decision making for a greater good.
In recent years, the number, scope and scale of these so-called non-state climate actions, such as the work of ECOLISE members, has grown rapidly. However, non-state actors still encounter obstacles that make it difficult for them to initiate and implement their climate actions successfully.
The European Economic and Social Committee, the European Committee of the Regions and the Climate Chance Association are launching the European Dialogue on Non-State Climate Action on 23 April. The purpose of this event is to put forward an action plan aiming at assessing, recognising, accelerating and supporting climate actions, as well as improving governance. The event seeks to promote the common voice of non-state actors. ECOLISE will be represented at the meeting by Meera Ghani, policy coordinator.
The event will take the form of a regional Talanoa dialogue, designed to take stock of the collective efforts of Parties to the Paris Agreement on Climate Change, and will include both plenary sessions and participatory workshops focusing on turning the dialogue into an actionable agenda. It will bring together experts from national and subnational governments, the private sector, financial institutions and leading international and civil society organisations.
A draft programme and registration form are now available. Please note that registrations are open until 18 April.
For any questions, please email .
This website uses cookies to improve your experience. We'll assume you're ok with this, but you can opt-out if you wish. Cookie settingsACCEPT
Privacy & Cookies Policy