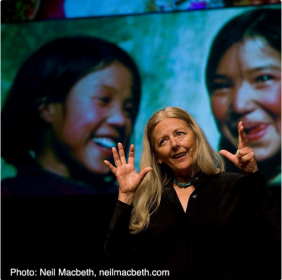 One of the guest speakers was well-being and localisation campaigner Helena Norberg Hodge who co-founded GEN in 1991. Speaking in Sweden she underlined five fundamental strategies for change: connect, educate, resist, renew and celebrate.

Eco villages are “amazingly successful, considering they are going against the tide. It’s difficult to combine a livelihood with living in that way. The regulations make it difficult. Despite all that, they are growing,” she told the Guardian newspaper in Britain before the Swedish event.

She acknowledged that living in ecovillages is still a small trend compared to the local food movement which is becoming much more mainstream: “You’re getting farmers markets set up, food hubs, box schemes, urban farms and farm shops. All of that shortening of distances is also happening globally. So it’s very encouraging.”

One of the many who attended the GEN gathering was writer and activist Nara Petrovic from Slovenia. An ECOLISE council member, afterwards he blogged about the gathering:

‘Robert Hall, the president of ECOLISE, stressed that solidarity is inevitable because we need to stay connected with those who suffer; ecovillages are open spaces of help and new ideas. Resilience is necessary because humanity needs to adapt to the boundaries of the planet today; it is essential to focus on UN Sustainable Development Goals and to network globally. Hope is not vanishing even though we are in dark times. We can change quickly, if that is necessary. And if we change together, we’ll be so much more effective.

Kosha Joubert, the executive director of GEN, pointed out that over the past 40 years, biodiversity on the planet has declined by 50%, there is an increase in logging, mineral extraction, and waste production. 200 environmental activists were killed last year, and, as it seems, this figure will be even higher this year. Natural disasters are getting more and more intense. In the meantime ecovillages around the world are showcasing increase in biodiversity and how solutions to global problems are most efficient when developed by small local communities.

This is the spirit of the Ecovillage Development Programme, which invites governments to use the ecovillage model as a way to realize the UN Sustainable Development Goals, relying on the power and will of people. More than 30 countries have already expressed the intention to transform their traditional villages to ecovillages in line with the four dimensions of sustainable development: social, ecological, economic and cultural.

Proof that this is completely realistic was an EXPO of sustainable practices. We could see a biodigester, which transforms organic waste into biogas and liquid fertilizer. Next to it was Whike, a three-wheeled wind-powered bicycle which can develop speeds of 50 km/h and more. There was a workshop to learn how to build a home wind generator. Another workshop was dedicated to learning how to build with mixed natural construction techniques. A few solar systems were exhibited, including a solar oven, which reached 180 C even in the scarce Scandinavian sun. The exhibition featured solutions developed by the grass-roots movement to simplify life at the juncture of sustainability and simple technologies.’