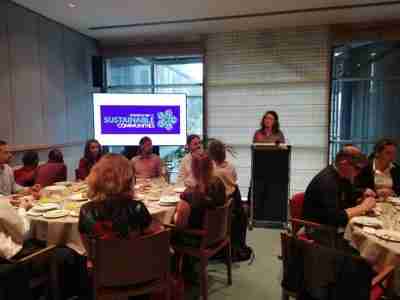 Over 40 people from ECOLISE member organisations and partners marked the European Day of Sustainable Communities at a breakfast meeting in the European Parliament hosted by MEP Seán Kelly.

Mr Kelly endorsed the European Day of Sustainable Communities and encouraged other policy makers to do likewise.

“Community-led initiatives have real transformative potential in that they allow for grassroots, bottom-up actions and allow communities to work together collectively and solve problems,” he said. “Of course, these actions are complementary to public policy actions, but we can see several examples where they can be empowered to be extremely effective.

He said he was most interested to read in ECOLISE’s ‘Reshaping the Future’ report that carbon savings resulting from active participation in community-led initiatives by five percent of the population would allow 85% of EU countries meet their 2020 emissions targets. And that additionally participation of all EU Citizens in Community-led initiatives would lead to emissions reductions over the EU as a whole of up to 73%.

“These are serious numbers and something that can make such an impact simply cannot be ignored,” he said.

Other MEPs in attendance were Molly Scott Cato and José GUSMÃO as well as officials from DG Regio and DG Clima.

Peter Schmidt, President of the Sustainable Development Observatory of the European Economic and Social Committee, which has supported the European Day of Sustainable Communities since its launch in 2017, and Francesca Whitlock, ECOLISE Co-President, also addressed attendees.