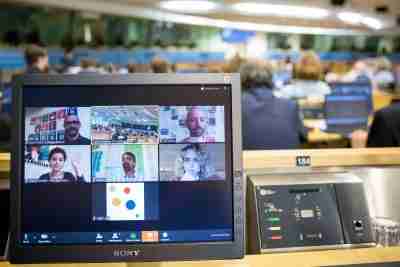 (25 September 2017) – EU officials and stakeholders from local and regional government, the European Parliament, ecovillages, the Transition movement, community initiatives and researchers welcomed the first European Day of Sustainable Communities at a launch conference in Brussels on 22nd September, co-hosted by ECOLISE and the European Economic and Social Committee (EESC).

Opening the event, Brenda King, chairwoman of the EESC’s Sustainable Development Observatory said: ‘There is need to showcase local community led sustainability initiatives in order to demonstrate their huge potential and capacity for the implementation of the Paris Agreement and the Sustainable Development Goals of the 2030 Agenda.’

Keynote speaker Rudolf Niessler, director for Smart sustainable growth and programme implementation at the European Commission’s DG for Regional and Urban policy, said he strongly supported the European Day initiative. ‘We all agree we really need to mobilise bottom-up actions,’ he said. ‘We need high quality management for the use of EU funding.’

Marion Esnault, of the ongoing Fete des Possibles in France and Belgium which has some 1500 events celebrating transformative community-led initiatives asked: ‘What are politicians waiting for? ‘Citizens understand that we need change if we want to maintain civilization as we know it.’ She was one of five people to join the meeting live from around Europe using online meeting software, Zoom, a tool regularly used by ECOLISE members.

Speaking from a global perspective, Kosha Joubert, executive director of Global Ecovillage Network International said that Europe has a moral imperative to take a leadership role and support local communities. ‘Funding is available but not much arrives on the ground to the communities,’ she said.

Philippe Lambert, MEP, co-chair of the Greens/EFA group, who joined the conference for the panel discussion said: ‘No one has the intelligence to singly direct the transition. We need to harness our ‘collective intelligence’, ‘modify our democratic models’ in order to do so and lift the roadblocks to local initiatives, he said.

‘Many local initiatives bump up against structural problems when they wish to implement community projects.’

‘Authorities should lift obstacles by making land available for urban gardens and by not burdening local food suppliers with harsh controls,’ he said. ‘The common agri policy CAP should encourage actors of change rather than the big agrifood business.’

Guest speaker Artur Runge-Metzger, director of climate strategy at the European Commission’s DG Clima, said that without the groundswell of community action the Paris agreement would not have been possible. ‘It cannot be left to governments alone to do top-down implementation,’ he said.

With regard to funding of community-led initiatives in Europe he said the EU had some experience of micro-finance programmes in Africa. ‘The question is to how to broaden it.’

Lidija Pavic-Rogosic an EESC member from Croatia said the EESC supports local initiatives in its opinions that it sends to the Commission, the Parliament and the Council. She said we need to increase the scale up and to look at the interaction of local initiatives and local governments.

Karl Falkenberg, former Director-General for the Environment at the European Commission, was the keynote listener, a role he said he had never before filled. ‘We have seen an incredibly political discussion’ with ‘new thinking and new ideas’, he said. ‘The debate is about upscaling.’

He also said that there was a debate about trust and control. In Europe he said trust was generally being offered to big interests – citing Dieselgate by way of example – while ‘small interests were controlled down to the last digit’.

He said people have a collective responsibility and that action ‘cannot stop in our little communities’.

Robert Hall, president of ECOLISE, said the organisation was delighted that members in 15 countries had spontaneously organised events to celebrate the first ever European Day of Sustainable Communities. ‘Now we need more cohesion between action in communities, researchers and policy makers,’ he said.

The conference was facilitated by Sarah McAdam, Delivery Director for Transition Network.