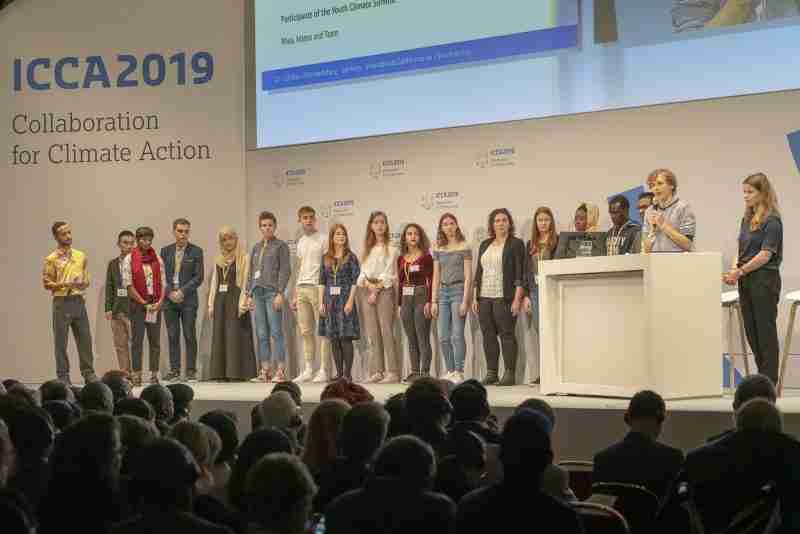 In late May, I visited the beautiful city of Heidelberg, taking up an invitation to represent ECOLISE as a keynote listener at the ICCA 2019 conference on Collaboration for Climate Action. ICCA 2019 was a partnership of the three main levels of German government, federal, regional and local: the national Environment Ministry, the State of Baden-Württemberg and the City of Heidelberg. It sought to emphasise the importance of collaboration in bringing about the transformative action on climate change necessary to maintain average global temperature rises within the 1.5°C limit recommended by the Intergovernmental Panel on Climate Change.

Recognising the importance of civil society involvement in such collaborative action, the organisers had invited strong presence of grassroots organisations from across Germany and beyond. Alongside the main conference, Climate Neighbourhoods at several venues scattered around University Square in the heart of the old city showcased a range of community initiatives and held a Climate Action Festival that included practical actions such as a Repair Café and communal meal prepared from saved food. A Youth Climate Summit held in the days immediately before the main conference had delegates from around the world, including schoolchildren involved in Fridays for Future, and included workshops on system change, climate justice and land use changes for climate mitigation. Spokespeople from all these groups had speaking slots in plenary sessions at the main conference. In addition, the conference website listed a number of flagship collaborative climate action initiatives, including the Municipalities in Transition project and European Day of Sustainable Communities. Outside the formal programme, climate activists organised a march and demonstration outside the conference venue on its first day, with banners calling for Degrowth and climate justice highly visible.

Taking a ‘bumble bee’ role of buzzing between different sessions in all parts of the conference, I witnessed both common ground and contrast between the main event and side activities such as the Climate Neighbourhoods. Striking, but perhaps unsurprising, was the universal acceptance of the need for rapid and transformative action to remain within the 1.5°C limit. All speakers – whether from government, civil society, academic or business – clearly recognised the seriousness and urgency of the situation, the need to upscale existing solutions at an unprecedented rate and the central role collaboration is likely to take all parties out of their existing comfort zones if this is to be achieved.

Most speakers from policy and business explicitly framed their analysis within existing economic paradigms, many alluding to such dangerous myths as ‘green growth’ and ‘decoupling’. In contrast, the conversations and presentations I heard at the Climate Neighbourhoods were invariably framed, implicitly or explicitly, within a post-growth perspective that recognises continued growth in GDP, and political commitment to its perpetuation, as part of the problem. There were presented alternative approaches of the kind highlighted in our recent Status Report, that focus on regenerating social, ecological and cultural value as the basis for high levels of wellbeing, sustainable in both human and ecological terms. Many such grassroots initiatives, within the German Transition Network and elsewhere, have been supported by the German government through its National Climate Initiative.

The conference was designed to bring these different perspectives into direct dialogue, in particular when civil society groups reported back to plenary sessions in the main conference hall. The Fridays for Future representatives, for example, expressed their anger at being ignored, their disappointment their prospects of a positive future are being stolen and replaced with one of failing ecosystems and a destroyed planet. Refusing to be patient with a slow pace of change, they called for change in political processes that are themselves part of the problem, and for Germany (as the world’s fourth highest emitter) to take radical action, including carbon neutrality by 2035, supported by measures such as a carbon tax of 180€ per tonne. To mark the presence of the conference, they decided to hold that week’s strike on the Thursday, to coincide with its second day. Like the civil society protest the previous day, its mood was cooperative, if defiant: both emphasised that meeting and talking, while important, are useless if they don’t lead to rapid and meaningful action, with conference delegates warmly invited to join in. The demonstrations, in turn, seemed well received by the conference organisers, who clearly recognise the need to shift the parameters of dialogue and action beyond the stale boundaries of established political processes and the important role of civil society participation in bringing this about.

My role was to add a civil society voice to two summary sessions, midway through the conference and towards the end, in dialogue with Karsten Sach, Director General at the Federal Ministry for the Environment, Nature Conservation and Nuclear Safety and phenomenal weaver of realities Minu Hemmati. I picked up on a theme introduce by Federal Environment Minister Svenja Schulze in her opening address to the conference, when she referred to the famous old song I Lost my Heart in Heidelberg. I suggested that true collaboration is a lot like falling in love, in being a surrender to something bigger than oneself and opportunity to grow beyond the boundaries of our current perspectives, opinions and concerns. I noted the opening of heart and mind that comes from hearing and understanding the views of others that might be radically different from our own, and treating them as equally important to our own, and the sheer joy of being part of emergent processes that could not have happened the same way without our input, but that go beyond anything we could achieve or even manage by myself. I told how I had seen at the conference potential for a true coming together and co-creation of this kind, if those involved are able to recognise and bring forth their own unique contributions to this and let go of the power dynamics that might limit those of others. Conference facilitator Natasha Walker skilfully summed this up as a call for combination of courage and humility.

The overall impression I took from the conference was one of great positivity and hope. The German government is clearly serious about its commitment to meeting the climate challenge and recognises the vital role of civil society action in bringing this about. Like all governments, it remains constrained by what is considered politically acceptable. Through events like ICCA 2019 and the wish that these feed into September’s UN Climate Summit and beyond, it is showing a willingness to respond to recent rapid changes in public opinion and challenge these boundaries of possibility through dialogue and collaboration with radical grassroots actors who are now increasingly recognised as offering vital solutions. As a consequence, the space of possibility for engaging established political structures in ways that can help bring about the rapid and genuine transformation needed to create a sustainable and just society is greater than ever before, if we are prepared to step into it.