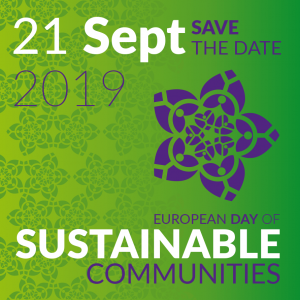 ECOLISE has launched the European Day of Sustainable Communities 2019 (EDSC19) with a call to citizens, communities and organisations committed to transformation in the face of ecological and climate breakdown to join in co-creating the day.

EDSC19 is a celebration of local communities taking action for an inclusive, regenerative and zero-carbon Europe.

Last year events in 24 countries marked the day. There were conferences, open days, apple harvests, tours, concerts, shared meals and much more. This year communities and organisations supporting community-led action are invited to organise an event between the 14th and 28th September, with the 21st September being the main focal point.

Participants are invited to register their event on the EDSC19 website which is now accessible in five languages – Croatian, English, French,  Slovenian and Spanish – with more to come.

“The concept is very simple,” explains Eamon O’Hara, Executive Director of ECOLISE, the main organiser of EDSC19. “Taken individually, local, citizen or community-led initiatives seem insignificant and barely register on the radar of policy makers or the general public.  However, by linking initiatives and actions through the EDSC19 we can show the cumulative effect – how many, many small-scale initiatives are adding up to something incredibly big and impactful, and how this can spread outwards and upwards to bring about real transformational change.”

“It’s quite incredible what’s happening in communities across Europe and globally. There is real concern about the future, especially among young people, as seen by the student climate strikes.  People are stepping up and channelling their energy into positive action, through protest, but also by working together to transform their communities, reducing emissions and environmental impacts, whilst reviving their local economies and building new social networks and bonds.”

“In 2019 we want to build on this success. Already we have national coordinators in 9 countries, as well as three international partners: La Fête des Possibles in France and Belgium, which coincides with EDSC19; Rurener, the European network of rural communities committed to the energy transition; and World Cleanup Day.”

“We invite anyone who is working locally for a more inclusive, low-carbon and regenerative society to help us celebrate the Day by organising an event, however small, and registering it on our site.”

To mark the EDSC19, ECOLISE is also planning a round-table discussion with members of the European Parliament in Brussels in September, in collaboration with the European Economic and Social Committee (EESC) and the Committee of the Regions (CoR), the EU’s assembly of local and regional authorities.