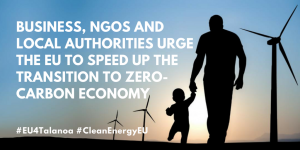 (12 June 2018) – A Coalition for Higher Ambition comprising a unique gathering of businesses, investor groups, local and regional authorities, and civil society groups including ECOLISE, today called upon EU leaders to accelerate the transition to a zero-carbon Europe and thus limit climate impacts and allow for improvements to public health, greater competitiveness for businesses, and an increase in good quality jobs.

The Coalition believes that the current EU climate commitments need to be raised in order to keep the Paris Agreement goals within reach. The stakeholders urge EU leaders to:

The statement comes prior to the High-Level EU Talanoa Dialogue where key decision makers and stakeholders will be discussing ways to step up climate action; and the final round of negotiations on the EU’s energy legislation for 2030, both taking place on 13 June. ECOLISE’s policy coordinator Meera Ghani is representing ECOLISE at the Talanoa Dialogue event.

“Together we believe that the full implementation of the Paris Agreement means much deeper emission cuts than currently planned. Europe must embark on a pathway that delivers on the 1.5°C objective of the Paris Agreement. This means adopting the Parliament’s position on the future energy legislation, but also much more than that: considerably increasing the target for reducing carbon emissions by 2030 and cutting emissions to net zero by 2050 at the latest.”

“The future of Europe needs to see business and governments working together to deliver a prosperous, resilient, zero carbon economy and to achieve the goals of the Paris Agreement. More and more businesses are showing how innovative business thinking can reimagine the way we do things and make zero carbon not only possible, but good for people and good for business. But they need policy makers to set the direction and make policy frameworks fit for purpose.”

“While investors strongly welcomed the historic achievement of the Paris Agreement, it is vital that governments now step up their ambition in order to fully implement it. In the EU, clear, long-term and ambitious policies which are designed to accelerate private sector investment into the low carbon transition can support large-scale deployment of capital, promoting sustainable economic growth and boosting job creation while also cementing the EU’s position as a global leader on climate action.”

“The action of national governments must further enable local leadership on the clean energy transition. Local authorities across Europe and globally are taking bold action to tackle climate change, with many acting faster and going further than their national level counterparts. Europe’s leaders must be unwavering in delivering on the Paris Agreement targets while ensuring that all levels of government are well-equipped to play their part.”