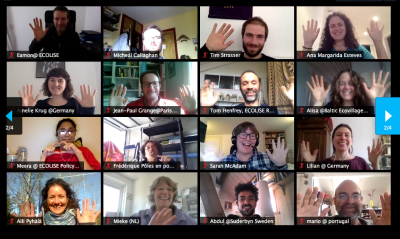 Over 50 people from across Europe gathered online at the annual ECOLISE General Assembly recently, in a remarkable show of social connection at the height of an unprecedented global crisis.

“The pandemic accentuates that what we have been doing for the last five years is gaining relevance all the time,” said Eamon O’Hara, executive director. “Our members are resilient and grounded in their localities, in their communities, engaging with sustainability and climate action, and showing the strength of community-led action.”

In welcoming everyone to the GA co-president Fran Whitlock said the corona crisis: “gives us, community-led initiatives, with the tools and methodologies we have been using and refining over the years, the chance and the responsibility to come into our own.”

Indeed keynote listener, author Daniel Cristian Wahl, suggested that ECOLISE’s whole purpose may be “to be ready for this moment in order to enable this social connecting across Europe”.

The focus of the meeting was discovering ECOLISE’s new action programme, Communities for Future, which seeks to inspire communities across the continent to take action for a better world whilst providing tools and resources to help them, advocacy to change policy in support of such community-led action and a way of capturing the knowledge created by such communities.

At Daniel’s suggestion it became clear that Communities for Future must offer communities good questions with which to envision their own answers.

“I invite you to include a layer of questions because if we really want to enable communities within their region everywhere to engage in becoming regenerative forces, both socially and ecologically, then the one thing we can give them is the questions to start with,” he said.

He urged ECOLISE “to harvest out of the collective intelligence a set of questions” which could then be handed to communities through the European Day of Sustainable Communities, on 19th September, at which Communities for Future will be formally launched.

In addition to small group discussions in breakout rooms, and a world cafe style session in which participants could move freely between sessions (thanks to the technical know-how of the facilitation team) the gathering heard inspirational stories from around the network. These stories show how ECOLISE members are sharing knowledge and experience from ecovillages, Transition initiatives, the permaculture movement and other community-led initiatives upwards and outwards.

Thomas Meier shared his insights from the Living in Sustainable Villages project whereby the ecovillage Schloss Templehof in Germany started collaborating with neighbouring villages. “Ten percent of people in the other villages are already very like-minded and wanted to work with us,” he said.

Sara Silva spoke about Municipalities in Transition, which develops and tests a structured way for municipalities and local governments to connect with their communities to respond by adopting a systemic view and methodologies inspired by the Transition Towns movement.

The Permaculture project with neighbourhoods in Romania was explained by Adina Moise. It began with simple seed sharing but grew to include diverse events on alternative education and community-building. It sparked the interest of local municipalities and has since been supported at city level.

Philip Revell explained the impact of the Scottish Government’s Climate Challenge Fund, how the Scottish Communities Climate Action Network is organised and works. It recently produced a Climate Action Pioneers project report based on in-depth interviews across public, private and civil society sectors. It revealed a widely shared understanding of the economic system being the root cause of the Climate Emergency.

ECOLISE’s innovative experience in organising excellent online and blended events came to the fore at this General Assembly – the meeting ran very smoothly based on years of experience. Up to 69 people came for the main presentation of Communities for Future, and over 50 people for the duration of the two-day meeting.

The GA was initially planned as a blended event with in-person participants travelling to Jarna, Sweden. The Swedish organising team had planned a meeting on the eve of the GA. It was shifted to an online event which drew 500 people to the online Zoom meeting, while 5000 people followed on Facebook livestream.

The spirit of the meeting is captured in a quote by E.F Schumacher shared by Daniel: “We cannot raise the winds but we can set the sail so when the winds come we are ready.”

“So many of us have been setting the sails and the winds are now coming. We are ready. Everyone, everywhere needs to really collaborate now at a scale that is unprecedented in the history of humanity.”