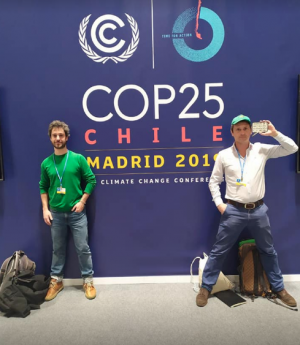 ECOLISE members from Spain and Portugal, in addition to Network and Outreach Coordinator, Juan Del Río, brought the voice of community-led initiatives on climate change to the COP25 climate negotiations in Madrid.

They participated actively at the Cumbre social por el Climate (the Counter COP), which ran alongside the official proceedings. “This was self managed by social movements at the Universidad Complutense de Madrid,” says Juan. “It was super rich with engagement and activity, with more than 350 different sessions and workshops, allowing social movements to meet and a place for many people who didn’t get into the COP to have a voice. It was very alive and ECOLISE was very present.”

ECOLISE representatives networked with many Indigenous people, social movements such as the solidarity economy movement, Extinction Rebellion and Fridays for Future, and ECOLISE partners such as the European Economic & Social Committee. “We also took part in the massive demonstration of 500,000 people on Friday 6th December,” says Juan.

Duncan hosted a workshop on alternative media for social movements, while Juan led one on synergies for building communities’ resilience. “I talked about ECOLISE and the work of our members, and we had very good participation at the workshop,” he says.

ECOLISE had not planned to attend COP25 but decided to do so once the country host changed following the unrest in Chile.

“Given that the COP changed from Chile to Madrid and that everything had to be prepared very quickly, we were able to bring the voice of ECOLISE and connect with important networks and partners,” said Juan. “Of course we know that the protests in Chile are taking place because of austerity measures and the impacts of the global extractive economic system which has led to climate breakdown. In terms of attending the COP, overall it was a very intense, good experience although frustrating at the same time.”

“This was the first COP where the different demonstrations and activities were completely separated to what was going on inside, and 300 observers were “debadged”. Everything is getting more and more polarised.”

“There was a sense of urgency but instead of the talks focussing on climate justice and paying back the ecological debt, the main narrative was about market-mechanisms, green growth and techno-optimism,” recounts Juan. “In essence, the complete opposite of ECOLISE’s message of zero-carbon regeneration and inclusivity.”