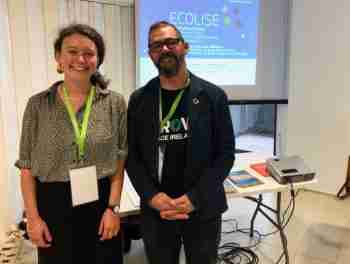 She told the story of how the regional government of Navarra, one of the wealthiest provinces in Spain, came to the Iberian Ecovillage Network, an ECOLISE member, two years ago seeking their secret to rural regeneration. The officials had realised that the hubs of “rural social innovation” were where ecovillages and similar community-led initiatives had taken root.

A pilot project has since been launched by ecovillage Arterra Bizimou near Pamplona, creating local groups to reverse rural exodus and provide sustainable, regenerative livelihoods in previously abandoned villages by using the ecovillage model.

“It’s a model of community-institutional collaboration that the network hopes can be replicated across depopulated rural areas around Europe with a view to regenerating both land and rural communities,” said Francesca. For her full speech please see below. 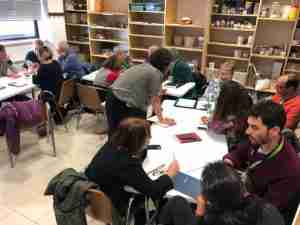 Fran and Davie led two well-attended workshops to explore how Rural Parliament members and ECOLISE could work together to support community-led transformation in rural areas.

In opening the workshops they told participants that the challenge of transitioning to a Low Carbon Climate Resilient Society requires not just action at national and international levels but, most importantly, it requires ongoing, long-term, deep engagement at local community level.

“Community led initiatives across Europe and elsewhere are actively envisioning creating and living within alternatives that are rooted within sustainability equality and social justice. These initiatives must be supported and become the basis of a new normal if Europe is to achieve its ambitious targets on climate action and sustainability,” said Francesca.

Davie presented a case study of community-led action in Cloughjordan, Co Tipperary, where the ecovillage and wider community is modelling a resilient and low-carbon society.

Feedback from the workshops is being used to inform the European Rural Parliament manifesto, due in 2020.

“We want to know your secret.”

That’s how the government of one of Spain’s wealthiest regions approached the Iberian Ecovillage Network two years ago. And what secret was that? The government of Navarra, that like so many across Southern Europe, was waking up to the harsh reality and impacts of the trend of rural exodus, had studied the data, and had realised something curious was happening. Bucking the trend of rural exodus, there were certain rural hotspots where population was staying stable and even rising, not falling. Where babies were being born. Where small local businesses were operating. Where organic agriculture and local food systems were thriving. And where were those? These hubs that so stood out to the regional officials were hotspots where ecovillages and similar community-led initiatives had taken root.

So, informed by decades of rural social innovation thanks to hubs like ecovillages and transition towns, we in the ecovillage, Arterra Bizimou near Pamplona, joined forces and launched a pilot project that is, right now, creating local groups that aim to reverse rural exodus and provide sustainable, regenerative livelihoods in previously abandoned villages by using the ecovillage model. We’ve been voted onto the local council and implemented green waste management schemes to feed local chickens with organic waste from the village, we run community clean-up days and community-supported agriculture schemes.
It’s a model of community-institutional collaboration that the network hopes can be replicated across depopulated rural areas around Europe with a view to regenerating both land and rural communities.

It’s initiatives like this that ECOLISE unites and supports because, like the Navarran government did, we see how community-led initiatives are bolstering local resilience to a changing climate, and a changing world. The Iberian Ecovillage Network, whose work caught the government’s eye, is a member of ECOLISE and has been working for decades to tackle the climate emergency and associated crises with a holistic, participatory model of rural development.

So it was hugely exciting when the Navarran government came to ask our secret – but we also knew that really, there is no secret. We are doing what humans have always done, especially in rural areas: being the proverbial village that raises the child, being the network of mutual aid that has been lost in a system that disconnects us from each other and from nature.

And I want to point out that this transformational shift isn’t just happening in alternative hubs or intentional communities. It can, and does, happen in towns and traditional villages like Ungersheim, in North-eastern France. Through a combination of visionary leadership and empowered local participation, Ungersheim has become an emblematic example of the Transition Towns movement, showing what’s possible when you plan with community and climate in mind. Ungersheim has transformed itself from a former mining town to a sustainability hub, with – amongst others – a market garden providing employment for young people, a local currency, renewable community energy, and dozens of other initiatives that connect people to their place, create a sense of pride and ownership, and a thriving rural hub.

I don’t need to convince anyone of the science or the scale of the global climate emergency, of biodiversity loss, of extreme weather and of its very local, real impacts. I know there are farmers in the room and you will have seen it up close and personal, because rural areas are on the front lines of climate change in Europe; here we see predictions about Mediterranean agriculture and all of us who work the land know that the conventional ways of exploiting the land, leeching the soil, of monocultures, are no longer viable.

It is beyond doubt that change is inevitable and that transformation is necessary. But we have a choice in how we respond. Rural areas also have great power to be at the core of the transformative shift that must occur – and is already underway in places like those I’ve just told you about. We’ve seen that we need a new relationship with the land, that regenerates it, while also caring for the people who work the land and supporting them in transition, which is why community is so important. This transformation is about a shift in power and focus: decentralisation and local ownership.

Now is the time to define what that shift will look like and who will own it.

What is the rural world we want? How can we become resilient for the shocks to come? What we at ECOLISE see as people respond to the climate crisis is a powerful shift to decentralised, local action and ownership, as in Navarra and Ungersheim. Rural areas – at the climate frontline – have the opportunity to harness social innovation and revive local communities and economies in a regenerative, circular way that respects people and planet.

But as we hear about these examples, we may be tempted to ask: yes, these are all very well – but are community-led initiatives like the ecovillage project and Ungersheim a drop in the ocean when faced with the enormity of the climate crisis and the ever-shrinking window for a global response?

No. From our vantage point in ECOLISE, we know that far from a drop in the ocean, they are really the turning tide. ECOLISE has undertaken the first large-scale study of community-led climate initiatives in Europe, the results of which were published earlier this year in its first Status Report. The evidence shows that there are thousands of such initiatives across Europe, and that taken together their impact can be vast, both in terms of climate but also reviving rural communities. A few numbers for you – an estimated 2 500 community energy initiatives, 1 500 Slow Food communities, 500 ecovillages and
about 7 000 community-supported agriculture schemes feeding healthy, locally-produced food to over a million citizens.

And this is is vital. The EU-funded TESS research project concluded that if only five percent of the EU were to engage in effective community-led climate change adaptation initiatives, carbon savings would be sufficient for 85% of it’s countries to achieve their 2020 emission reduction targets. Permaculture, transition towns, community energy, ecovillages, smart villagers and all of us in this room who are engaging with climate emergency in our communities are part of this solution.

But for community-led initiatives to reach their full potential in enlivening rural areas and responding to the climate crisis, fulfilling their promise of a rural transformation with people and planet at its heart, there is a need for institutional support and enabling environment at all levels – with supportive legislation, funding, and well-informed policy at the EU, national regional, and local levels. We need more examples like that of Navarra and Ungersheim, with local and regional institutions listening to community-led initiatives and providing them with financial and policy support.

With the right support, community-led initiatives can help meet the climate crisis in rural areas with resilience and – dare I say it – with joy as we reconnect to our communities and to the planet.

It’s clear that we are at a crossroads for rural areas, and we see community-led initiatives as guides to the transition. Through harnessing them, through social innovation and community engagement I believe we can and will witness a renaissance of thriving and resilient rural areas – which is what I know all of us in this room are working for today. So let’s get to work.