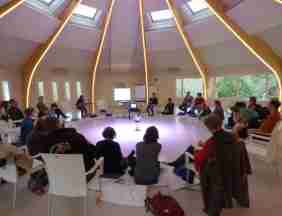 (24 March 2017) – Over 30 people from throughout Europe gathered on 6-8 March – in person and online – at ECOLISE’s third annual general assembly, in the Basque country.

The two-day meeting, which was hosted by the Amalurra community, took stock of 2016, celebrated ECOLISE’s achievements, planned for 2017 and elected a new council.

During the year 2016 ECOLISE continued to build its resource base, securing core funding to pay part-time policy, communications, and knowledge and learning coordinators.

ECOLISE’s achievements in 2016 include: the launch of the European day of sustainable communities; a new ECOLISE website; an EU policy training event in Brussels; participation in COP22 in Marrakech; the network’s representation at 18 different international events; and the launch of a new book.

Three new member organisations – the transitions research Institute, DRIFT, based in the Netherlands; the Sunny Hill association from Slovenia; and CESnet in Italy – were welcomed to ECOLISE, thereby increasing the network to 38 member organisations.

The last business of the meeting was to finalise the election of ECOLISE’s council, president and vice-president, following a process based on sociocracy, the collaborative model of governance that uses consent decision-making.