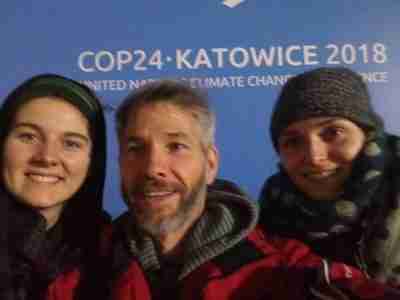 (17 December 2018) – Robert Hall was one of ECOLISE’s representatives at the recent UN climate meeting in Poland. Here he shares his thoughts on the fortnight-long meeting:

“I am on my long train ride home from the COP 24 in Katowice, Poland. It was a mixed bag of results. A thick Paris Rulebook was actually approved which makes the historic climate agreement operational. Perhaps most positively the details of the independent scientific Global Stocktake were agreed. This cyclical status country-by-country report will start in 2023 and inform countries on the need to enhance their ambitions to stay at 1.5 degrees warming. It was agreed that it includes the developing countries demand for equity and everyone’s wish for best available science. COP 24 was basically a climate financing event and countries made commitments to the near-empty Green Climate Fund (GCF), the Least Developed Countries Fund and Adaptation Fund. But the developed countries’ $100 billion goal for climate finance by 2020 did not get met or even clearly assigned. Instead there was lots of resistance to making clear accounting procedures and allowing loopholes to exist. How to transition of the flawed pre-2020 carbon markets from the Kyoto Protocol period could not be agreed. Thus no framework exists for post-2020 carbon markets. The so-called “Article 6” decisions were therefore postponed to COP25 in Chile November 2019.

The Paris Agreement is neither people-centered nor rights-based. The COP 24 edited out all references to human rights in the implementation of the agreement. While Non-State Actors are mentioned, the Paris Agreement, unlike the Agenda 21 processes started in Rio 1992, does not automatically include the role of citizens and communities. For that matter it does not include the roles of regional and local governments as well as businesses. As a bad historic precedent civil society participants of the COP were arrested, detained and deported by Polish authorities,something not seen previously.

A few rogue oil-producing countries including the historically largest emitter did not want to welcome the IPCC report which is clear on what must be done in the next 12 years to kept to 1.5 degrees average warming. Remember that without major action we will be at a humanity-threatening 3 degrees warming. Instead these countries chose to slow down and water down global cohesion around the report to get a weaker Paris Agreement. Rich countries in general are not taking their moral responsibility for their historic pollution which made them rich and now causes poorer countries to be disproportionately more plagued with the adverse effects of climate change.

What the COP 24 leaves us with is space for personal, community and national action to raise ambitions. We can all deliver more, pressure our local governments and regions to become fossil-free earlier and get our national governments to radically revise upward their Paris commitments or Nationally-Determined Contributions (NDCs) for 2020.”