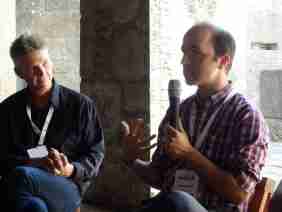 (28 June 2017) –  An international climate change festival in Porto, Portugal recently brought together over 200 participants with speakers, musicians and street artists from all over the world, to join the debate on sustainability and future resilience.

The event, which was launched for the first time this year, attracted widespread local media coverage.

In parallel with the event terrible forest fires broke out in Portugal, reportedly due to lightening and the recent extreme heat wave that hit Iberia.

‘The fires and heat of course remind us of the climate change we are already experiencing while Gaia Todo Um Mundo gave me hope that there is surprising momentum for change in this southwestern corner of Europe,’ said Robert. ‘The festival has the potential to catalyse cooperation between municipalities, civil groups, culture groups and business for the climate and sustainability.’

Other participants who are actively involved in ECOLISE were Ana Huertas of Transition Spain and Gil Penha Lopes, Lisbon-based academic researcher, author and permaculture practitioner.

‘Local politicians, religious leaders, scientists and social activists shared their experiences in responding to the current global challenges,’ said Ana. ‘The mixture between ‘thought’ sessions and art was refreshing, a great way to wake up the heart into feeling and help integrate all the information we received.’