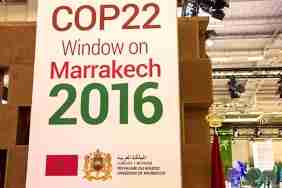 (15 November 2016) – Donald Trump’s election appears to have stalled the momentum of the Paris Agreement. Concern over the future of the deal is palpable among participants at the COP22 in Marrakesh.

“After a difficult year, we have things to celebrate,” said EU Climate Commissioner Miguel Arias Cañete. “Not only a historic agreement on the climate, but also progress on HFC gasses and aviation emissions.”

But as the Marrakesh climate conference entered its second week on Monday (14 November) Cañete insisted that more needed to be done “to keep the spirit of Paris alive”. One year on, this spirit is wavering. And Donald Trump’s threat to pull out of the Paris Agreement has many fearing the worst.

So far, just 14 EU member states have ratified the deal. The reluctance of the other 14 forced European diplomats to be creative, ratifying the Paris Agreement on behalf of the EU after receiving the green light from the European Parliament.

While this allowed the agreement to enter into force as planned on 4 November, the concrete consequences of the deal, which must be defined by 2018, are still in limbo. In the current context, the EU’s lack of ambition and unity of vision is all the more worrying. (EurActiv)