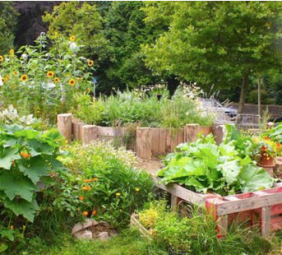 (19 December 2018) – A collaborative citizen research project involving community gardeners, allotment holders and natural and social scientists from the Natural History Museum and CELL, the Centre for Ecological Learning Luxembourg, has begun in Luxembourg.

“We would like to produce the kind of knowledge that interests both gardeners and scientists,” explains project coordinator, Karine Paris, of CELL.

The aim is to have 30 gardens involved in the project so that results will be statistically representative.

There were 50 gardeners from 25 gardens at the project launch in November so Karine is optimistic they will reach the required number. “People were very enthusiastic,” she says. “They came from all around the country, mainly around the city but some in the south and one or two in the north.”

The garden types that qualify for the project are those that are entirely communally managed, those that have a mixture of individual and communal plots and city gardens made up of communal plots on the same site.

The exact research questions to be investigated are still being decided through a participatory process with the gardeners and experts involved.

“There is no topic that we will avoid,” she says. “There is no number one question – they will all be as important as the next.”

The idea for the project was born of a long-time desire of both Karine and a friend of hers, Tania Walisch. As a ministry of environment employee Karine had previously initiated a project to train community garden facilitators and developed a website to enable citizens to find a community garden: www.eisegaart.lu Tania is an ecologist at the Natural History Museum.

“We always wanted to do a project that combines research and permaculture.”

Karine wrote a project proposal for the ministry which was accepted, approved and a contract with CELL was agreed.

“We are all gardeners, even the experts are gardeners,” says Karine, who herself coordinates a large community garden and orchard, a place she describes as paradise. “This year we grew corn, pumpkins and beans, salads, aubergine, beets, beetroot, paprika, pastinak, turnips, carrots, potatoes and onions.”

Karine’s passion for community gardening as a means of social transformation is clear when interviewing her, even via temperamental online channels (we had to revert to a landline in the end!). She is determined that this project will produce research findings that are useful for both the wider public and a more expert audience. “We are going to publish in an open source journal and in local newspapers.”

The project received €40,000 in funding from the Ministry of the Environment and the National Research Foundation.