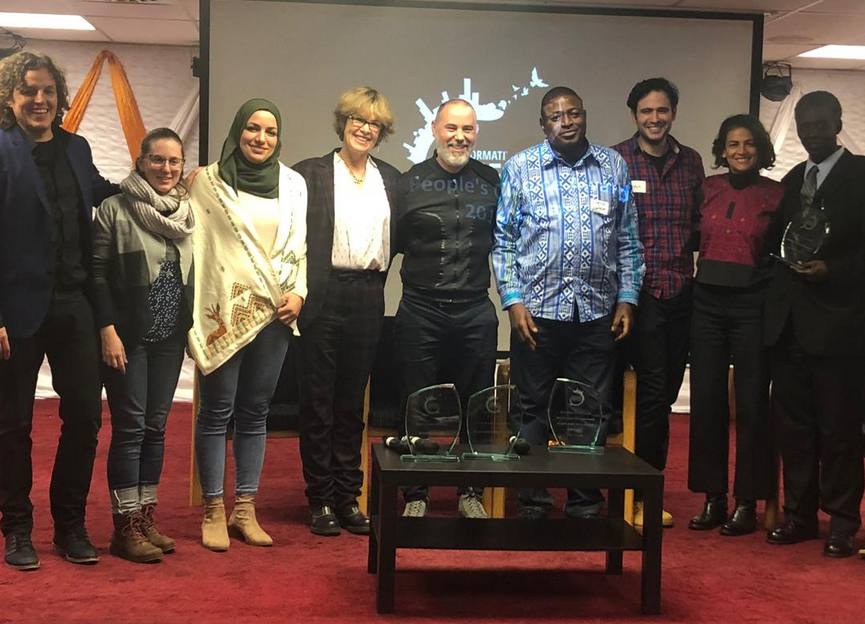 Citizen-led initiatives from four cities in Africa, Europe and Latin America were this month declared winners of the 2019 Transformative Cities People’s Choice Award.  Their work on water, energy, housing and food systems was applauded at a public award ceremony in Amsterdam.

The four initiatives were chosen from a selection of 12 finalists in an online vote by more than 5000 people. The award was launched in 2018 by the progressive think tank, Transnational Institute (TNI), to highlight people-led initiatives experimenting with new ways to practice democracy and secure access to basic rights. The second edition of the award was co-organised by TNI with ECOLISE and Friends of the Earth International, Habitat International Coalition, The Global Right to the City Movement and RIPESS.

The result in 2019 is an Atlas of Utopias featuring 33 inspiring stories from 24 countries, from which the finalists were chosen.

The winners of the People’s Choice Award are:

Transformative Cities coordinator and TNI researcher Sol Trumbo said: “These experiences show the capacity and power of people-led initiatives to address today’s global crises. They show there are public alternatives to the private corporate models that extract wealth, concentrate power and destroy the environment. We hope these and all the stories in our Atlas of Utopias inspire people everywhere to keep taking action and strengthen the people-based solutions we need.”

David Ngige, who received the Food Systems Award on behalf of the Dajopen Waste Management Project from Kitale (Kenya) noted: “Transformative Cities People’s Choice Award is very important because it brings together unacknowledged people from all over the world, to address the challenges and celebrate the achievements of the world’s communities and societies.”

Eloi Badia, Councillor of Cimate Emergency and the Ecological Transition of the Barcelona City Council, receiving the award in the Energy Category on behalf of Barcelona Energia: “We have hacked the system and demonstrated that there are alternatives”.

Isadora  Hastings, who received the Housing Category award on behalf of Cooperación Comunitaria from Ixtepec (Mexico) remarked: “This award helps to highlight and share the achievements of Cooperación Comunitaria. After the 2017 earthquake, we worked with and integrated the knowledge of the community to rebuild their houses and upgrade them to resist future earthquakes.”

Akinbode Oluwafemi, from Lagos (Nigeria), who received the Water Category award on behalf of Environmental Rights Action – Friends of the Earth Nigeria said “This recognition will  motivate us to remain resolute in our quest  for a definitive win in Lagos, because we know a win in Lagos will spur groups across Africa  in similar conditions to fight on. We dedicate this award to the women, the labour activists, opinion leaders, youths, our international allies and  several others marching shoulder to shoulder with us to resist water privatisation in Lagos, Nigeria and Africa.”