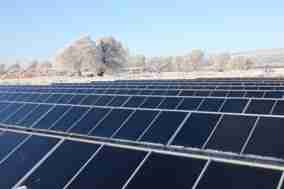 (07 November 2016) – As the COP22 opens this week in Marrakesh, recent news about solar power has been positive, with record-breaking tariffs reflecting the fast-declining price of solar electricity. But even solar plants can come with a heavy environmental footprint, writes Andreas Wade of First Solar.

Concentrated Solar Power (CSP) has a footprint of 20 grams of carbon dioxide (CO2) per kilowatt-hour (kWh) of electricity produced, in addition to consuming vast amounts of water. Similarly, photovoltaic (PV) power plants also have carbon footprints which, on a lifecycle basis can range from 12g per kWh to as much as 24 g per kWh for those using multi-crystalline silicon panels.

France’s progressive policy on reducing the carbon footprint of its solar energy programme serves as a precedent for other countries to follow. The tools – such as France’s competitive tender structure and a new European initiative to introduce ecolabels for PV modules – already exist.

And as PV is established as the lowest-priced electricity, it is time to level the playing field further and include the environmental externalities of electricity generation in this equation. We need to ensure that we do not repeat the mistakes of the past 150 years of fossil fuel use. (EurActiv)