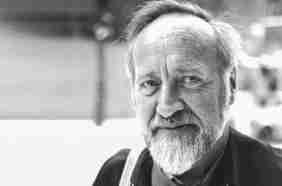 (13 October 2016) – A moving tribute to Bill Mollison, who died 24 September in Tasmania, a true pioneer who gave up a promising academic career to challenge the status quo and establish the global Permaculture movement.

A few people are born who are world class heroes to those who know them and unknown to the great majority, until one day their inescapable influence floats to the surface and is generally recognised for the cream it is. In hindsight such leaders go on to become household names.

Such a man was Bill Mollison: backwoodsman, academic, storyteller, lady’s man and to many just ‘Uncle Bill’, but doing all these things par excellence.