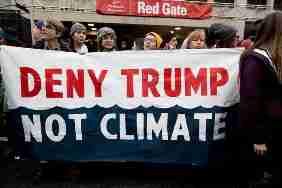 With France’s Emmanuel Macron taking the lead, they lashed Trump’s decision as misguided and vowed to defend an accord they portrayed as crucial for the planet’s future.

In an exceptional step, continental Europe’s three biggest economies – Germany, France and Italy – issued a joint statement to criticise Trump’s move and say no to his offer of renegotiating the deal. “We note the United States’ decision with regret,” they said, describing the carbon-curbing accord as “a vital tool for our planet, our societies and our economies.”

The US pull-out from the agreement was also denounced by many cities, local authorities and organisations in the United States who did not hide their shame on Thursday. (EurActiv and other sources)