A Potato Revolt begins in Sweden in response to covid-19 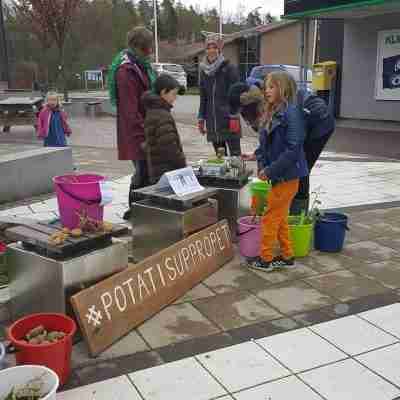 On 11th April 2020 a handful of local citizens in the north Swedish town of Söderhamn marched to the city hall demanding action on food production in light of the Covid-19 crisis. Their actions have sparked similar protests around Sweden, reminiscent of the Potato Revolt of 103 years ago. At the end of World War One, some two hundred women from Söderhamn started a nationwide food uprising on 11 April 1917, due to widespread hunger in Sweden.

In Söderhamn, local NGO Närjord, which is part of Southern Norrland Transition Centre, delivered a list of 22 demands to the local municipality (see below). And while the Potato Revolt of 1917 saw mass gatherings by 1st May that year, the current Revolt found other, socially-distanced ways of demonstrating this 1st May, with flash mobs across the country placing buckets of potatoes and posters urging revolt. Images of community groups planting potatoes together and protest buckets in Malmö, Gothenburg, Molkom and in front of the parliament in Stockholm were shared on social media. And Sävarådalen’s Garden Club near Umeå distributed Potato Revolt buckets to 10 villages to spread the concept.

The list of 22 demands presented to Söderhamn municipality on 11th April to be implemented in May-June 2020 are:

1. The immediate establishment of municipal food safety crisis groups.
2. The provision of emergency funds to finance increased self-sufficiency including long-term sustainable food production.
3. Seeds and seeds are immediately purchased on a large scale
4. That the fertilizer supply is secured
5. That other necessary input goods are secured
6. That existing food producers are supported by all available means
7. That all available land is immediately inventoried and made usable
8. That all greenhouses produce edible crops in 2020
9. That a large number of smaller greenhouses are bought and loaned to citizens in civil society who can produce food for several people.
10. That the municipality starts urban cultivation in possible places
11. That “starter packages” for cultivation on balconies and similar places are offered
12. To offer intensive courses in the cultivation of different crops
13. To offer intensive courses in agricultural jobs
14. To regularly blog with tips shared actively on social media
15. To collaborate with local producers, wholesalers, distributors to secure the food chain
16. To immediately contact the Employment Service for emergency work
17. To immediately investigate the possibilities for stock keeping and processing
18. To immediately examine distribution channels, cooling chains, etc.
19. To coordinate opportunities to harvest more in the forest (herbs, berries, mushrooms, etc.)
20. To cooperate with the hunter clubs in the municipality for the autumn hunt
21. To explore other possibilities for alternative food production
22. Immediately start your own seed production of necessary vegetable crops

Anders Persson of Närjord had calculated that every inhabitant needs some 150 kg of potatoes annually and at an average price of 20 SEK/kg anyone in Söderhamn concerned about the food situation could purchase a local and organic “potato share” for 3000 kronor or roughly 300 EUR which Närjord would cultivate and deliver after the autumn potato harvest.